Fresh Start Women's Foundation provides education, resources and support for women to positively transform their lives and strengthen our community.

Since 1992, Fresh Start Women’s Foundation has been on a mission to provide education, resources and support for women to positively transform their lives and strengthen our community. We envision a community where every woman reaches her full potential through achieving personal empowerment and financial self-sufficiency.

Our nonprofit organization helps women 18 and up focus on key areas of their lives, with a wide range of services, classes and workshops designed to teach self-confidence, life skills and career development.

Fresh Start is all about women helping women, and it’s been a true passion project for founders and sisters, Pat Petznick and Beverly Stewart. Pat and Beverly watched their grandmother become the sole support of their family and vowed to one day support women who found themselves in similar circumstances.

Over the years, the Arizona natives became ardent community activists on behalf of women. In 1992, Pat and Beverly were in a position to personally and professionally reach out to women in need and initially offered a day of pampering each month at the salon they co-owned, inviting 20 women to boost their confidence and self-esteem. Later that year, Fresh Start Women’s Foundation was officially born. In the early years, the foundation focused on fundraising and granting money to Arizona nonprofits serving women in need. Over time, Pat and Beverly realized there were big gaps in women's programs being offered in our community. 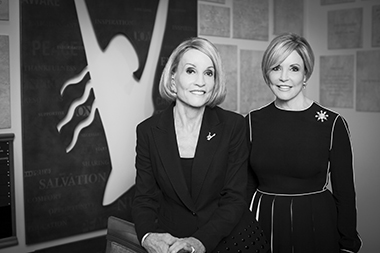 Our efforts to close those gaps began with the formation of our mentoring program in 1998, and in 2002, the Women’s Resource Center opened its doors and gave us ample space to welcome women to take advantage of our growing catalog of services.

As the organization grew, two new boards were added, bringing an impressive array of community leaders to the effort.

1992 ~ Fresh Start is formed by Pat Petznick and Beverly Stewart with a one-year pilot program with the Governor's Office for Women and the Arizona Coalition for Displaced Homemakers.

1995 ~ Board of Directors is established.

1999 ~ Men's Board is formed to raise money through the Charity Golf Classic.

2000 ~ A $7.1 million capital campaign launches to build a women's resource center in Phoenix.

2007 ~ The Fresh Start Gala raises more than $1 million for the first time.

2013 ~ Career Center opens in partnership with Goodwill of Central Arizona.

Women come to us from a number of different situations. Some are recently divorced or separated. Others are unemployed, or simply looking for a new start on life. They’re looking for a friendly face, helpful guidance and a chance to become the woman they know they can be—all in a place where they can feel safe. And that’s why we’re here.

Take the first step in the journey to the life you deserve. Learn more about attending the programs and services at Fresh Start!